Raising Money Through Syndication – What You Need To Know

Part One: What You Need To Be Mind Of With Multifamily Syndication 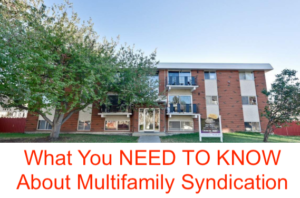 To make the biggest deals happen, investors often need a little help.
It is rare for one single investor to have enough capital sitting around to be able to create a large Multifamily deal by themselves.
Which is why Syndication is a popular alternative. It helps you to raise the capital you need to make the deal happen.

However, there are different kinds of Syndications and various regulations to follow.

So, which option is right for your deal?

Let’s look into why you would consider syndication and what you need to be mindful of with this kind of investing.

Most people who choose to utilise Syndications do not have the funds to solely invest or they need a larger amount of capital to secure a bigger deal.

Many investors don’t have enough money to buy all the real estate they want to own and control under their own steam. So, they reach out to other people that want to invest in Multifamily Real Estate but may lack the expertise. These people are happy to put their money with a Deal Sponsor in order to start their investment journey and begin learning the ropes themselves.

What is a deal Sponsor

A deal Sponsor, also known as General partner, can make a good living from performing the role of Fiduciary for the investor’s money in a specific project.

The term Fiduciary goes back to the Roman days. When somebody died, the fiduciary went into their house, took all their belongings and was in charge of distributing it according to their wishes. In modern terms, a fiduciary is someone who takes care of other people’s assets and follows through on their wishes.
With Deal Sponsor playing the role of Fiduciary in a Multi Family deal, investors can have the confidence that their money is being allocated in the right way. Security gives investors another level of protection.

When an investment is regarded as security the deal sponsor needs to deal with a certain set of laws.
So, what is security?

Well, it comes into play when a group of people are investing their money in a common enterprise and they expect to make a profit with their investment through the efforts of a third party (like the promoter or someone else). That by definition is a security. “An investment of money, in a common enterprise with an expectation of profits through the results of someone else.”

The 1933 Security Act states that every security has to be registered with the Securities and Exchange Commission, also known as the SEC. This is to protect the investor and the investees.

Now that we understand the basic premise of security, it is time to explore the decision process of investing in a syndication and how the two types might work.

When you are considering making a Multi Family investment through a Syndication, there are some important questions you need to find the answers to.

When a deal is member managed or a manger is put in place, different circumstances apply.

This is an example of how a deal can be member managed:

John & Dan talked about investing in a 70 unit apartment community in Tennessee together. Let’s say John lives in TN, and invites Dan who will provide the majority of the funds to visit. Dan takes a flight from New York to look at the project.

While in TN, John & Dan go to the bank to open a bank account, apply for the mortgage and will make all the decisions together.

In John & Dan’s example they are the 2 members of the Limited Liability Company (LLC), but there is no manager. All the decisions are unanimous. The definition of security does not apply in this case as the profits are not being made through the efforts of someone else. They are created through the partners’ own efforts.
It doesn’t only have to be a duo investing together for a deal to be Member Managed.

It also works when a small group of investors, say 3 or 4, create a deal together. It is still a member managed LLC if they all vote on each decision and no one member was in charge.

A Managed Deal For Multifamily Syndication

Member managed deals can work if there are two, three or four investors. But it is going to fall apart pretty quickly if you have 30 investors involved in a deal. That is when the investors would need one experienced Deal Sponsor to drive the process.

Often it is the Deal Sponsor that would seek out the other investors. They would have an idea of the kind of deal they want to make and have access to great ones through their network of contacts. They then raise the capital for these big deals by offering a group of investors the chance to come on board with them.

The Multifamily Syndication investors are usually starting out on their investment journey and want to learn the ropes. Or, they don’t have quite enough capital or experience to go into a Member managed deal yet.

In this circumstance, the Deal Sponsor would need to register the security for the deal with the Securities and Exchange Commission.

As you can see there are few boxes to tick to qualify as a member managed investment, in opposed to a manager managed LLC. That’s is why it is really important to pay attention to the SEC world of security.

So, those are the basics of why you might choose to raise money for a Multifamily Syndication and the two different ways of doing it.

Stay tuned for part 2 of this topic where we look into the different regulations involved with security and the practicalities of setting up a Multifamily Syndication.

The Information provided here is for general education only.  You must seek professional legal advice concerning the U.S. Securities and Exchange Commission law. Federal and State securities laws may differ by state or the nature of the transaction.